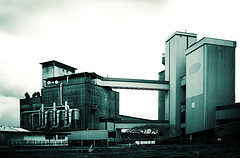 As predicted, the Bibb County Industrial Market experienced a substantial vacancy increase in 2006 with the 2.2 million square foot Brown & Williamson Plant officially being added to the existing vacancy inventory of more than 2 million square feet of space.

Total Industrial space in the Bibb County market increased to 16 million square feet in 2006 as a result of the addition of new businesses in the area:

There is no significant industrial spec space planned for 2007.  The selection of industrial space under 75,000 square feet will continue to be limited as the majority of the unusually high vacancy is in the over 100,000 square foot category.

Prospects for 2007 are also encouraging.  Macon’s central location in the state with good proximity to Atlanta as well as the coastal ports should keep the Macon MSA the primary consideration for both manufacturing and distribution users in the future.  Additionally, Cumberland and Western Resources, Inc. has purchased the former Brown & Williamson plant and plans to re-develop it for multi-purpose use.