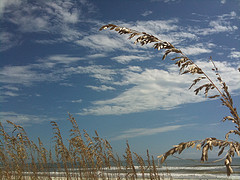 The Forgotten Coast, located in the Panhandle of Florida, stretches from Alligator Point (south of Tallahassee) westward to Mexico Beach.  The name was coined in the early nineties when a Florida tourism group “forgot” to include information about this area on their map.  This prompted a local group to create their own brochure and map and call the area the Forgotten Coast.  Lacking a nearby interstate or even a single 4-lane highway, the area was bypassed by the waves of development that left high-rise condos towering over many of Florida’s beachfront communities.  Recognizing this lack of development as an asset, local government imposed restrictions that limited development and protected this quaint area.  As a result, single family detached homes on individual lots are the primary residential property type found here.  For years it has remained a vacation and retirement destination for those trying to avoid the crowds found at other Florida beach locations.

At the heart of the Forgotten Coast you will find St. George Island.  This twenty-mile long barrier island separating Apalachicola Bay from the Gulf of Mexico is divided into 4 distinct subareas:    St. George Island State Park, The East End, The Gulf Beaches, and The Plantation.  A four mile bridge connects the mainland to the center of the island and the heart of the commercial district.  Occupying the first three blocks to the east and west, you will find all of the restaurants, retail shops, grocery and convenience stores.   On either side of the commercial district are 8 blocks that make up the Gulf Beaches area.  Comprised of 1/3 acre lots, this area has the highest density of single family homes on the island.  Eastward of the Gulf Beaches is the East End which is divided into residential one acre lots and small gated communities of five to ten homes each.  Beyond the East End is the entrance to the St. George Island State Park which occupies approximately 8 miles. Left in its natural state with the exception of a few picnic areas and boardwalks, the State park is a rare example of an original Florida barrier island and remains as it was seen by the Spaniards who named the island in the 1500’s. At the western end of the Gulf Beaches area is the entrance to The Plantation. This private, gated community offers twenty-four hour security and a 3300’ paved runway. It consists of 900 lots that are a minimum ½ acre in size. These, along with many other amenities set The Plantation apart from everywhere else on the Forgotten Coast.

Having the distinction of being one of the more exclusive communities of the Forgotten Coast, the St. George Island Plantation has long been regarded as the bellwether of local property value trends.  In the late nineties, The Forgotten Coast was “discovered” and thus began a period of heightened real estate activity.  The following graph illustrates the qualified sales history of vacant beachfront 1-acre residential lots in the Plantation from 1986 to the present. These beachfront vacant lots are a more homogenous group and therefore ensure a more accurate assessment when applied as a constant for graphing historical sales activity.  The data was gathered from the Franklin County Property Appraiser’s website and represents 172 qualified transactions.  A graph of the Plantation housing market would be similar to this one, but home prices vary more at any given moment due to the many factors that influence home values and this would degrade accuracy.  A graph of the overall real estate market of the entire Forgotten Coast would also follow a similar line. 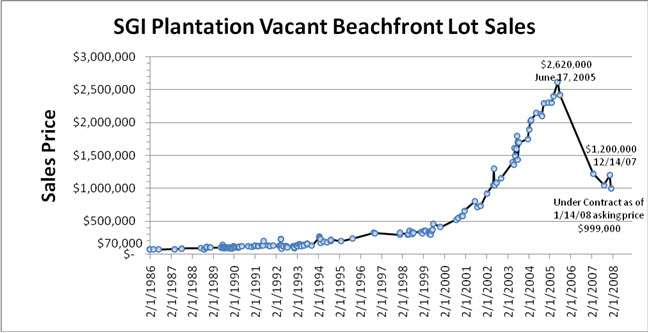 In the next part of this article we’ll look at the rate of sales over the last ten years for St. George Island.