All property owners, investors, small and large business owners, and people of Georgia should take an interest in a debate taking place in our State.  The time has come to eliminate all property taxes in Georgia, and I firmly believe the people of the state of Georgia should be given an opportunity to vote on a constitutional amendment to repeal all property taxes.  That opportunity could come in November of 2008 if the General Assembly will agree that Georgia’s economy should be based on the exchange and receipt of money and not taxing property. 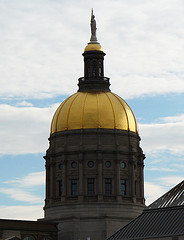 Unfortunately, there has been some confusion about the details of the current plan to eliminate property taxes.  We are not proposing to raise the sales tax or income tax rates.  When HR 900 was originally written, it was intended simply as a framework to open debate, gather ideas, and obtain input.  Since then, we have received complaints, suggestions, and opinions from citizens all across the state and that is exactly what we wanted.

From the beginning of this process, our goal has been to eliminate all ad valorem taxes in Georgia.  The details of exactly how we reach that goal have changed and will continue to change as we weigh the best options for our state, but one thing is clear.  The current property tax system is outdated, unfair, and excessive.

Georgia is divided into 159 counties, each with the power to tax their residents. 180 school districts also each have the power to tax.  But that power goes beyond simply collecting taxes.  Rather than determining the amount of money they have and then creating a budget, a county can simply determine how much money it needs and then decide how much to charge their residents.

Because of this phenomenon, a family can live in a home for 30 years and suddenly find they cannot afford it anymore because their property taxes have increased so much.  This same family is not requiring any more services from their local government, and yet that government keeps taking more and more money from them.  The biggest asset most people have is their home; it’s the American dream. Yet if they can’t keep up with increased taxes, they lose their home.  Even after the home is paid for, they realize they only have a land lease. Refuse to pay the tax and see how long you keep it.

The current property tax system was created when we were an agricultural society and people made a living off of their land.  The last overhaul of the system was 70 years ago, and since that time our economy has changed significantly.  Home ownership has increased from 30 percent to 70 percent.  We have moved from an agricultural society to a service-based society, as has the rest of the nation, and yet, we do not tax services at all.

Our proposal is called the GREAT Plan, which stands for Georgia’s repeal of every ad valorem tax.

The GREAT Plan calls for a sales, use, and service tax of 4 percent.  It also calls for an elimination of many sales tax exemptions that special interests have accumulated over the years.  By taxing services and eliminating most exemptions, we can generate the same amount of money being generated from the property tax, and we can eliminate all property taxes in Georgia.

Local counties, cities and school districts will be guaranteed to receive no less than the amount they are currently receiving.  If local control is what a community wants, they may continue local option sales taxes such as the SPLOST and ELOST, all of which will continue to be determined by the vote of the citizens.

To me the most important thing to note is that we have the opportunity to make History.  Our Four Fathers envisioned a land where its citizens could own their own property.  This is the first time in our nation that this is actually being considered.  A property owner would truly own their property rather than have a land lease from the government.  We have opened a dialogue in this state on serious reform of taxes so that Georgia may lead the nation.  As our State continues to grow the nation is listening to this debate with envy.  My request of you is to become involved in the discussion share your thoughts and concerns with your State Legislators as the debate about tax reform and HR 900 unfolds.  If we all get involved and take part in the discussion we can make Georgia a GREAT place to invest, live, work, and raise a family.